Cam Newton bounced back from a rough performance against the Dolphins last week on the Carolina Panthers opening drive against the Atlanta Falcons. Newton seemed to turn back the clock running for two key first downs including a touchdown on third down.

It was a less than promising start for an Atlanta defense that should have expected Cam to do what he does best. Instead, the entire Atlanta defense bit on the run fake as Cam ran almost untouched in for the early score. 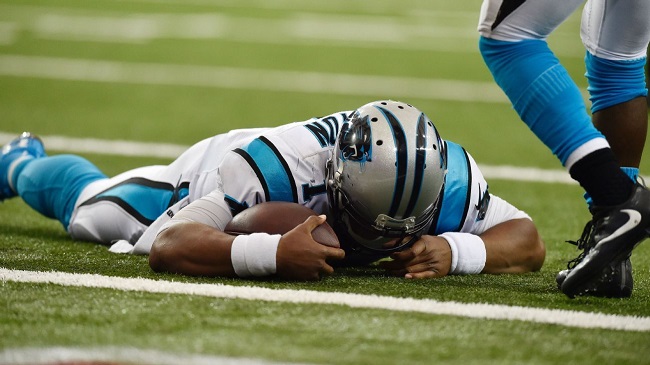 It was the second big run of the opening drive for Newton who scrambled for 11-yards to get an early first down. For Atlanta, the key to this game is going to be forcing Cam to throw the ball from the pocket.

If the first drive is any indication of how this game is going to go it is going to be a long day for the Atlanta Falcons. It is imperative that Atlanta loads the box and spies on Newton you must force Cam to beat your team with his arm not his legs.

Newton’s Touchdown Run is Early Confidence for a Player Who is Struggling to Hit his Targets With Any Consistency.

Atlanta was able to answer on the next drive with Russell Gage and Cordarrelle Patterson fueling a Falcons answer to tie the game at seven. Now with a chance to answer on defense Atlanta has to find a way to slow the Panthers’ rushing attack and not allow Cam to make this game about his rushing abilities.

If Cam is able to drop back in the pocket and slice up the Atlanta defense you live with that result. It gives the Atlanta Falcons their best chance at winning something the defensive coordinator must remind his young defense of ahead of the Panthers’ second drive.