The new Los Angeles Rams quarterback, Matthew Stafford, has high hopes for the team’s offensive potential. Nonetheless, the Rams’ running game is an often-overlooked part of the attack.

The Los Angeles Rams’ stable of rushers consists of guys like Darrell Henderson, Sony Michel, and Jake Funk. In addition to Henderson and Michel, who both have experience in the league, Funk is a fascinating third choice. 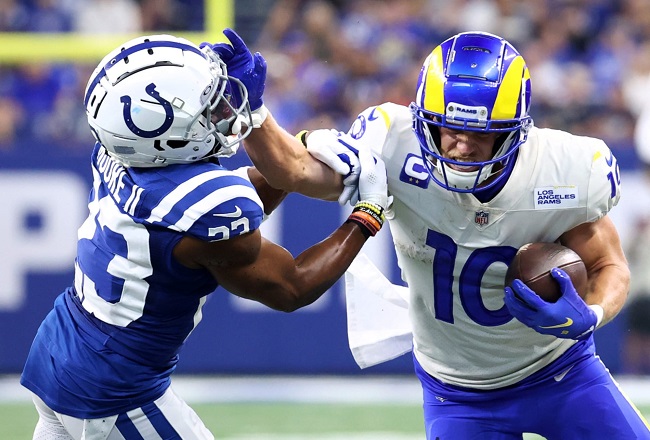 The Rams had considerably more success passing the ball than running it in their season opener against the Chicago Bears. In Week 2, though, the Rams’ rushing attack took off, as they routinely gained yards after contact and ploughed through defenders for first downs.

Henderson and Michel Combined for an Average of 4.4 Yards Per Carry for Los Angeles.

For the second time this season, Henderson has surpassed Michel in terms of touches, as he managed 13 attempts to Michel’s 10.

Stafford’s ability to chuck the deep ball and beat opponents over the top is well-known. While Stafford’s passing skills are sufficient, the Rams’ offence might benefit even more from incorporating a ground-and-pound running strategy.

As they rushed for over 100 yards against Indianapolis, the Rams showed glimpses of that potential. They tried 29 runs, which is just one less than passes.

The rushing game was important in unlocking the whole Rams playbook when the offensive was at its peak a few seasons ago. Stafford’s play-action passes would be harder to defend if the team ran the ball more and kept defences off balance.

The Rams’ overall offensive sophistication should be safe if they continue to receive contributions like the ones Henderson and Michel gave them on Sunday against the Colts.

Henderson’s latest rib injury, sustained in the second half of the Rams’ 27-24 win over the Colts, is a worrying development for the team’s running back corps.

McVay stated after the game that he did not have any new information about Henderson’s injury.

While Henderson has had some injury trouble in the past, when he’s healthy he’s a solid rusher with room to grow.