Today, Prince William and Kate Middleton are spending the day in Northern Ireland, where they will meet with local youth and learn more about the work of various community groups. They were not expecting to meet a big spider named Charlotte, which just so happens to be the name of their daughter. 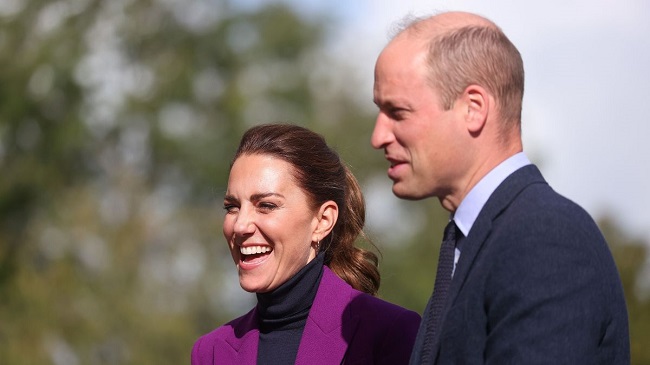 Kensington Palace shared a photo to social media with the message, “A unexpected guest appearance from Charlotte the tarantula,” showing a smiling Kate holding the hairy spider. William, who appears in the background, appears to be less excited than his wife about getting up close and personal with the creepy-crawly.

One image showed him with a snake in his hand. At the Magee Campus of Ulster University, they came across a petting farm and had these experiences with the animals there. While on campus, the royal couple also had the opportunity to meet some of the nursing students with whom they had spoken through video conference earlier this year.

The couple, who attended the James Bond premiere last night in a stunning golden Jenny Packham gown, landed in Northern Ireland at midday today, when Kate changed into a chic purple suit.

An embargoed tweet from Kensington Palace read, “It’s great to be back in Northern Ireland for a day in Derry-Londonderry hearing from young people about how life has been during the pandemic and meeting organisations working across communities.” This tweet was sent shortly after their arrival and announced the visit.

Although this is the couple’s first time visiting this particular area of Northern Ireland, they have been to the country on many occasions (in 2016 and 2019 alone) and are far from the only members of the royal family to have paid a visit to the area in recent years. This time last week, Prince Edward and his wife Sophie were busy attending events in Belfast.